The town of Liebenthal was founded on 22 February 1876 by a group of Volga German immigrants who had arrived in Topeka the previous fall. It is the oldest of the Volga German settlements of Ellis and Rush Counties and is located in Section 21, Township 16, Range 18 West of Rush County.

Its founders included the following families (along with the number of people in the family):

A second group of emigrants arrived at Liebenthal on 14 August 1876. They were all from the colony of Schönchen and had come to America in company with the founders of Munjor. This party was made up of the following families:

In September they were followed by a another group of families from Neu-Ober-Monjou:

Shortly thereafter, a disagreement arose among the inhabitants concerning the permanent site of the town. The tract of land in Section 21 on which the village was situated was poorly supplied with water and those in the group from Schönchen wanted to move the colony to the east half of Section 16 which was better supplied with water. A number of families had already built their homes on the new location in Section 16 when John Schaefer, apparently contrary to the agreement, deeded four acres of land in Section 21 to Rt. Rev. Louis Fink, 0.S.B., Bishop of Leavenworth, on which a church was to be erected. This split the settlers into two groups. The settlers from Neu-Obermonjour with the exception of the families of Henry Depperschmidt, Peter Depperschmidt and John Jacob Schoenthaler moved to Ellis County, Section 28, Township 15 South, Range 18 West, where they founded the town of Schoenchen. The others remained at Liebenthal and began building a church on the land donated.

The following Volga German families settled in and around Liebenthal, Kansas: 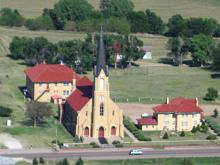