The marriage of Johannes (Philipp) Busch, son of Johannes Busch from Marienthal near Rockenhausen, and Eva Maria Knobloch, daughter of Conrad Knobloch, were married in Mettenheim on 6 May 1755. The birth of their son Georg Conradt Busch is also recorded in the parish records of Mettenheim on 29 October 1757.

Philipp Busch, a farmer, and his family arrived from Lübeck at the port of Oranienbaum on 29 August 1766 aboard the ship Apollo under the command of Skipper Detlov Merberg.

Philipp died after arrival in Russia, and his widow Eva remarried to Johann Georg Batt.

The combined Busch and Batt families settled in the Volga German colony of Dietel on 1 July 1767 and are recorded there on the 1767 census in Household No. 9.

The Anna Margaretha that is recorded on the 1767 census of Dietel as the sister of Johann Georg Busch is actually the younger sister of Eva Maria Knobloch.

The 1834 census of Dreispitz (Household No. 88) records that Adam Busch moved from Holstein to Dreispitz.

The Oranienbaum passenger list records that Philipp Busch came from the region of Friedburg. The 1767 census records that the Busch family came from the German village of Peterheer near Frankfurt am Main. Perhaps they moved to Peterheer from Mettenheim before immigrating to Russia? 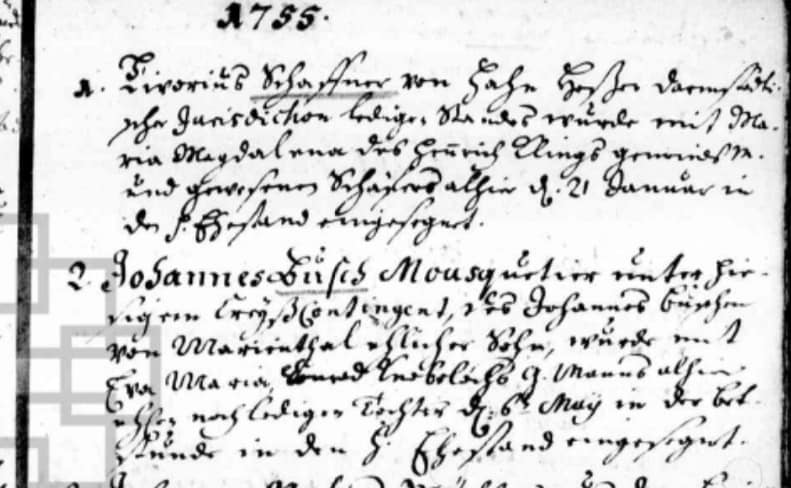 Record of the marriage of Johannes Busch and Eva Maria Knobloch in Mettenheim in 1755. Source: Wladimir Böhm.

Record of the birth of Georg Conradt Busch in Mettenheim on 29 October 1757. Source: Wladimir Böhm.