Matthaus Körbel, son of Urban Körbel & Catharina Branter, was born 10 February 1639 in Schlander (Tirol). He married on 10 February 1662 in Eschau to Anna Catharina Bolender, daughter of Peter Bohlender & Margaretha Kasch. She had been born 19 March 1646 in Eichelsbach.

Valentin Körbler married in Sickenhofen on 19 August 1749 to Anna Margaretha Kilian, daughter of Leonhard Kilian. She had been born 15 April 1729 in Sickenhofen.

Valentin Körbel, a farmer, his wife Maria, and children (Johann, age 17; Adam, age 13; Susanna, age 10; Barbara, age 7; Elisabeth, age 2) arrived from Lübeck at the port of Oranienbaum on 14 September 1766 aboard a ship under the command of Skipper Reders.

They settled in the Volga German colony of Hussenbach.

Oldest son Nikolaus Körbel and his family are recorded on the 1798 census of Hussenbach in Household No. Hs112; son Johann Adam Körbel is recorded in Household No. Hs021.The Oranienbaum passenger list records that Valentin Körbel came from the German region of Hanau.

The birth of Adam Kerbel, son of Andreas Kerbel & Maria Barbara Raab, is recorded in Hofstetten on 13 September 1711.

The births of two children to Adam Kerbel & Anna Catharina Reichert are recorded in the parish register of Hofstetten: (1) Maria Barbara, born in 1760; and (2) Johann Adam, born 6 April 1762.

Adam Kerber [sic], a farmer, his wife Katharina, and children (Maria Barbara, age 7; Johann, age 5) arrived from Lübeck at the port of Oranienbaum on 10 August 1766 aboard the Russian pink Vologda under the command of Lieutenant Sergey Bartenyev.

Widow Anna Katharina Kerber [sic] and son Johann Adam (age 7) are recorded on the 1767 census of Grimm in Household No. 84.

Georg Jakob Kerbel from Grimm and his family are recorded on the 1857 census of Oberdorf in Household No. 60.

Both the Oranienbaum passenger list and the 1767 census record that this Kerber family came from the German region of Erbach.

Urban Körbel was a blacksmith who came to the Eschau area from the village of Schlander in the Tirol region. Today, Schandler is located in Italy, but at the time that Urban lived there it was part of the Austro-Hungarian Empire. 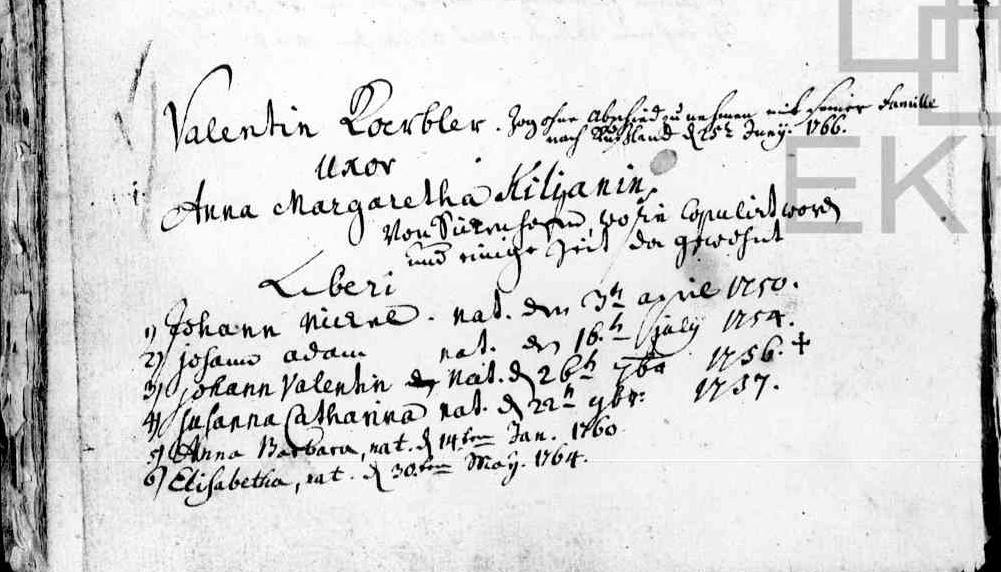 Entry of the Körbler Family in the parish register of Altheim.
Source: Maggie Hein.