Christian Theuerkauft, a linen weaver (Leineweber) and cottager (Kossate) from Quellendorf, having moved there from Libehna in the area of Köthen in 1753, left with his wife and four children (two sons and two daughters). Christoph Würcker from Hinsdorf bought his very bad, dilapidated cottager's house with 5½ Morgen church land for 10 Thlr. His debts amounted to 5 Thlr. 6 Pfg.; the remaining 4 Thlr. 23 Gr. 6 Pfg. was sent to the ducal government.

There are two Tenerkauf families (believed to be father & son) that settled in the Volga German colony of Kaneau on 7 June 1767. They both arrived from Lübeck at the port of Oranienbaum on 4 July 1766 aboard the English frigate Love & Unity under the command of Skipper Thomas Fairfax. They are recorded on a list of those being transported from St. Petersburg to Saratov in 1767 along with a note that Christian (senior's) wife died in route.

Joh. Christi. Theuerkauff, his wife Magdalena, and daughters (Maria Elisabeth, age 20; Johanna Sophia, age 13) are recorded on the list of colonists being transported from St. Petersburg to Saratov in 1767 along with a note that his wife Magdalena died en route.

Widower Johann Christian (age 43) and daughter Johanna Sophia (age 17) are recorded on the 1767 census of Kaneau in Household No. 3.

Christian Theuerkauff and his wife Mari. Dorothea are recorded on the list of colonists being transported from St. Petersburg to Saratov in 1767.

They are recorded on the 1767 census of Kaneau in Household No. 4 along with a newborn son, Johann Gottlieb.

There are no surviving male lines of this family among the Volga German colonies. 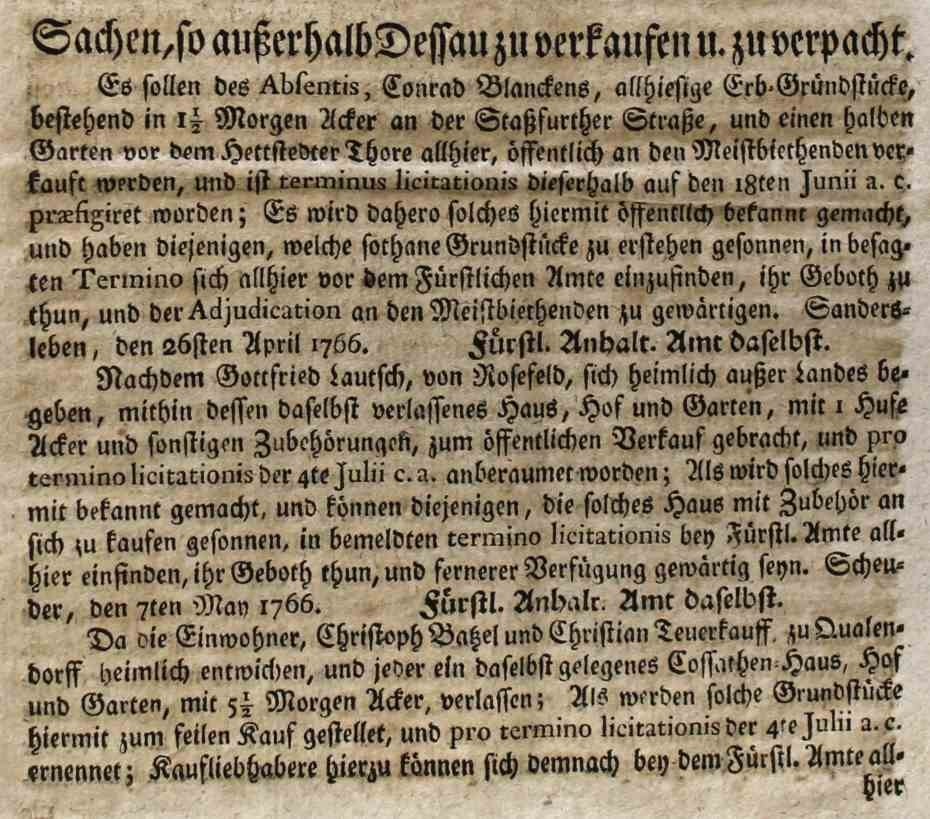 Publication of the pending public sale of the things of Christian Teuerhauff.
Source: Karl Becker.