Christian Gottlob Züge was born 23 February 1746 in the city of Gera, today in the German state of Thüringen).

In 1764, he went for Lübeck where he intended to depart for North America. While in Lübeck, he was persuaded by a Russian recruiter to resettle in Russia instead.

He arrived in Saratov in 1765 and was taken to the place where the Volga German colony of Kratzke was to be located. However, the first houses were not built there until 1766. He found the conditions to be intollerable and returned to Saratov where he secured employment. According to his memoirs which were published in 1803, after a few years in Saratov, he obtained a forged passport and was able to escape by foot to Kazan, and from there by horse-drawn carriage via Moscow to Poland. He arrived back in his hometown of Gera on 3 December 1774 to be greeted by his mother who was still living there.

Documents in Russia record that Christian Gottlieb Züge, a single cobbler (Schuhmacher), settled in the Volga German colony of Kratzke on 7 August 1766. He is recorded in Kratzke on the 1767 census in Household No. 10.

The 1767 census records that Christian Gottlieb Züge came from the German region of Sachsen (Saxony).

There are no surviving male lines of this family among the Volga German colonies. 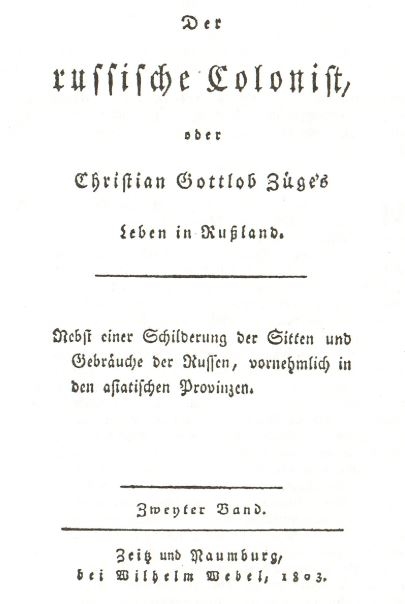