The Reverend John N. Sauer was born on 12 January 1890 in Mannsburg, Bessarabia (Russia). He immigrated with his family to the United States in 1901 aboard the S.S. Lahn and settled in Lind, Washington. He graduated from Redfield Seminary in 1920, after which he served as circuit riding pastor in Burt, North Dakota.

Following a memorial service at Rivercrest Congregational Community Church in Portland, he was entombed at Portland Memorial Mausoleum.

- History of the Pacific Conference of Congregational Churches of Washington, Oregon and Idaho, p. 11.
- The Sunday Oregonian, 9 September 1984, p. D13.
- The Volga Germans in Portland. 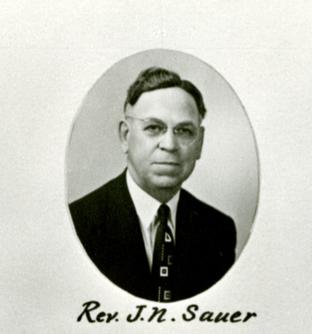