Grüntal was a Volga German settlement founded on the left bank of the Volga River, 75 kilometers south of Engels. It was located between Hölzel and Neu-Warenburg.

In 1942, following the deportation of the Volga Germans, the name was changed to Lugovoye.

When the Volgograd (formerly Stalingrad) Hydroelectric Power Station was completed in 1961, the colony of Grüntal was covered by the waters of the resulting Volga Reservoir. The map shows where it used to be.

There was no known religious structure in Grüntal.

Map showing Grüntal (1935) - before being flooded by the creation of the Volgograd Reservoir in 1961. 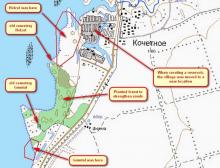