The state farm of Spartak was established in 1929. It is located 14 kilometers southeast of the Volga German daughter colony of Gnadenflur. About half of the original farmers who were resettled to Spartak were Volga Germans. The first director of the farm was Friedrich Riedel (1893-1939).

In 1941, all of the German inhabitants were deported.

Today, the only ruins remain of the buildings from the Volga German era.

Spartak was founded after the establishment of the Soviet Union, so there was never a religious structure in the village. 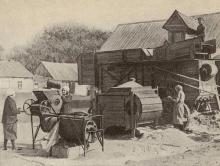