The congregation disbanded in 1928 and the building was sold. It was moved to WaKeeney the next year and converted into a service station.

The congregation of Ebenezer German Methodist Church of Russell County, Kansas, was served by the following pastors: 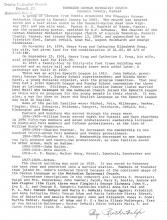