The Rev. Conrad Bechtold, a traveling pastor affiliated with the German Evangelical Synod of North America, arrived at Kiel, Oklahoma, in 1894 to serve the Germans-speaking people of the community. The following year, the Kirche der Deutschen Evangelischen Friedens Gemeinde (Church of the German Evangelical Peace Congregation) was organized.
On 9 November 1902, the cornerstone for a church building was laid, and the new facility was dedicated 15 February 1903. This church burned down on Mother's Day, 10 May 1953, as the result of an electrical fire. A new building was constructed and dedicated in 1954.
In 1961, the congregation reorganized under the name of Peace United Church of Christ

The members of Loyal Evangelical Church have been served by the following pastors: 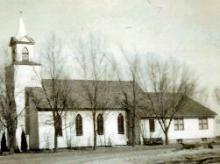