Attracted by the railroads and sugar beet industry of the Yellowstone Valley, many Volga German families settled in and around Laurel. On 28 January 1908, a group met to organize a congregation. The charter was signed by 103 members, and to keep harmony among the variety of faith practices from which these immigrants came, the congregation was called The German Evangelical Lutheran Reformed Congregational Church. Today, it is known as The First Congregational Church.
The first church building was erected on the corner of 3rd Street and Durland Ave. By 1938, membership had increased to 546. The congregation built two additions to the church, the first in 1924 and another in 1938. A new church was dedicate at the current location on 5th Street on 16 May 1971.

First Congregational has been served by the following pastors: 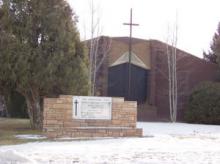