At the suggestion of the Rev. John Lich, a pastor in Friend, Nebraska, a letter was written to Mr. Jacob Legler of Straub, Russia, to come to Fresno to help establish a congregation for the people there. Mr. Legler was the parochial school teacher in Straub and the assistant to the pastor there. The invitation was accepted, and he arrived on 10 August 1891. A congregation was organized on 15 March 1892 with 85 members. The name chosen was "Evangelical Lutheran Cross Church," although the congregation was affiliated with the German Congregational fellowship. Mr. Legler was examined by the Ref. E. L. Chaddock of the local English Congregational Church, found qualified for ministry, and ordained as the congregation's first pastor.

The first church building was completed in 1895 on D Street. To accommodate the growing congregation, a new building was begun in 1914 at F and San Diego, and dedicated on 7 February 1915. It could seat 1,500 worshipers.

In 1947, this building was moved two blocks to the corner of E and Los Angeles in order to make way for the construction of the 99 Freeway. The final service at the old location was held 12 October 1947, and it was dedicated in its new location on 25 April 1948. This move was a tremendous feat, accomplished with an enormous amount of planning and very careful execution.

Following the celebration of the 50th Anniversary of the second church building in 1964, it was decided to look for a location to build a new church since many members now lived in other neighborhoods of Fresno. The old building was sold to the Fresno Temple of God in Christ in 1965, and the Cross Church moved into a temporary facilty on Thomas Street. Land was purchased at Palm and Gettysburg for the construction of a new church complex. The new church facilities were dedicated on 4 May 1969.

The Cross Church was served by the following pastors: 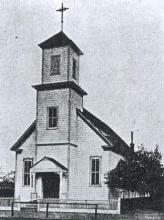 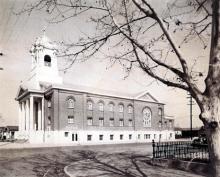 Aerial panorama of the area being prepared for construction of Highway 41. Lutheran Cross Church is visable center left as well as the new location that's been prepared just above and to the right.
Source: Highway Engineering Report. 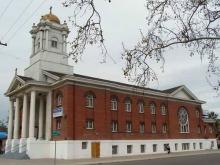