In 1999, St. Mark joined with St. Paul Lutheran Church in Galatia to form a joint parish served by one pastor. 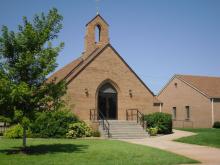