The congregation of St. Mary, Help of Christians at Loretto was founded in Illinois, Kansas, about four and one-half miles south of Pfeifer as is an offshoot parish. The founders of the new parish were:

Adam S. Urban and Stephen S. Urban each donated five acres of land for a townsite; Martin Urban gave one acre for a graveyard and Joseph M. Urban gave five acres for the church, parsonage and school. A single building combining the church and school was built in the fall of 1912 measuring 6Ox28x2O feet. The upper story was to serve as the church and the lower story as a school.

On 22 November 1912, Father Stutz was assigned to the new parish. On 10 June 1913, the new church was dedicated by Rt. Rev. J. J. Hennessy, Bishop of Wichita. Toward the close of 1913 the ten acre townsite was divided into lots 50x15O feet, and these sold for the benefit of the church. In 1914 the room under the church was furnished as a school and in September two Precious Blood Sisters, Agnes and Servana of Wichita, arrived. The teachers stayed with Anton J. Stremel until a convent measuring 28x26xl6 feet was erected in 1919.

Construction of a new, larger church building was begun in the spring of 1927. It was dedicated in May of 1928 to St. Mary, Help of Christians (Mariahilf Kirche). The original combination school/church building was destroyed by fire on 10 March 1948. A new church building was constructed in 1955. Due to declining attendance, the parish was closed. The final Mass was said there on 29 June 1997 and the building was re-designated as a shrine. It can be toured by appointment.

St. Mary Help of Christians was served by the following priests: 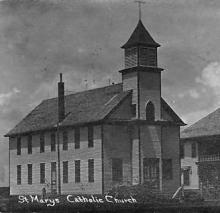 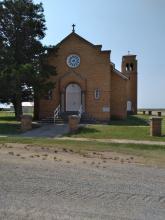 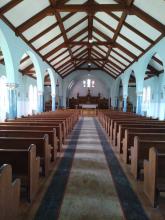 Interior of the Schrine of St. Mary, Help of Christians in Loretto (2020).
Source: Melissa Schafer.