It is not known exactly when settlers began arriving at Viale. By provincial decree, the train station was designated as Estación Viale on 7 July 1906 in honor of the former owner of the land upon which the station was located: Victorino Viale.

Many Volga German families settled in and around Viale.

The following Volga German families are known to have settled in Viale: 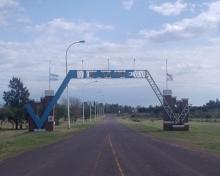