Settlement of Prudentópolis was instigated by the development of roads in the area beginning in 1882. When the Brazilian government decided to colonize the area, 1,500 Ukranian families settled there in 1895, and today approximately 75% of the population of the city is of Ukranian descent. Volga German families also moved there from the surrounding rural areas.       The city is named in honor of Brazilian president Prudente José de Morais Barros, the third president of Brazil (1894-1898). 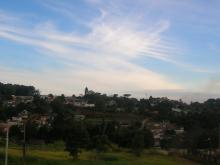