As early as 1887, there were Volga German families who had migrated to the village of Serakhs in Turkmenistan, along the Iranian border.

Following is an exerpt of a narrative by Henry Kissler (born 26 September 1867 in Frank; died 26 January 1955 in Greeley, Colorado) about his family's move to Serakhs.  This family history of Henry & Katherine Kissler, Sr., was written in 1946 and submitted by Conrad Krening of Portland, Oregon, for the Winter 1986 publication of Das Frankerer Nachrichtsblatt.

"Shortly after our marriage, we left Frank, with our parents, and brothers and sisters, and traveled to Middle Asia, where the Russian government had offered irrigated land for settlement. We accepted this invitation and settled in the region. The little village was called Seracks and was very close to the Persian border. There were about 50 families from various villages who came here to found this village. It was called in Russian, Kristowa (Paselka Kristova). Here we made our new home and lived here for 10 years. But this did not satisfy us. In this area, the summers are very hot, and were not accustomed to the heat. Also in the summer, there is no rain, not even a cloud in the sky. The drinking water was poor, so that humans and animals both often has to suffer. We could not decide whether to stay in this place, where we were unhappy, or to leave Kristowa, and to emmigrate to the United States.

It was with a feeling of satisfaction that we then sold all of our possessions and left the village of Kristova in November, 1902. Our family at that time consisted of my wife and I and four children and so we began our journey.

First, however, we went back to our old homes in Frank. There we stayed for awhile and visted with our old friends and relatives. But then came the hour that we had to take leave of our old home, and our loved parents, brothers and sisters. With the happiest memories of lives there, we left Frank and began the long journey to America." 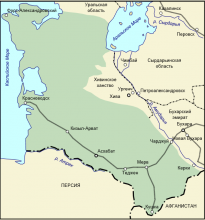 Map from Wikipedia showing the historic borders of the Transcaspian Oblast. 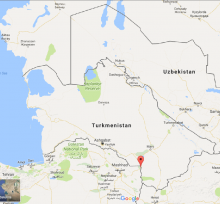