In 1892, approximately 50 Volga German families migrated to what today is Turkmenistan. Some of them established a colony called Saratov near Ashgabat. By 1904, the colony of Saratov was dissolved, as most of the colonists had relocated to Ashgabat itself and to a new settlement called Kozelkov near Merv in the Bairam-Ali region.

The 1926 Russian Census records that there were 296 ethnic Germans living in Ashgabat.

Much of the city was destroyed by an earthquake in 1948.  Today, Ashgabat is the capital of Turkmenistan. 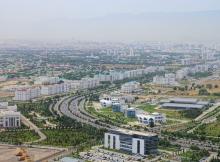 Metropolitan Ashgabat, from the north toward the city center (2015). The mountains in the back ground form the border with Iran.
Source: Bjørn Christian Tørrissen (via Wikipedia Commons).