The town of Pfeifer is located 10 miles south of Victoria on the south bank of the Smoky Hill River. It was founded in August 1876 (there is some discrepancy as to whether it was August 21 or August 24) by the following men, with the number of people in the family indicated in parenthesis:

Another group arrived in Pfeifer (Kansas) from Rothammel in late September 1876:

Part of this group from Rothammel went first to Ohio to visit Martin Basgall before going on to Pfeifer (Kansas). The last three listed here stayed in Ohio until August 1877 when they, too, moved on to Pfeifer:

The original site chosen by the first founders was in Section 25-14-17 of Freedom Township. Several families objected to the location, however, and in 1884 the town was moved to the northwest quarter of Section 36.

The following Volga German families settled in and around Pfeifer, Kansas: 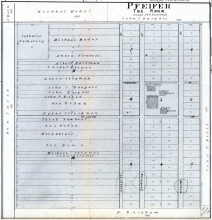 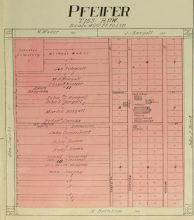 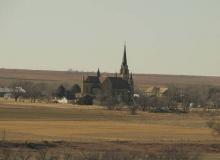