The birth of Andreas Flegler, son of Johann Philipp Flegler & Maria Barbara Klein, on 6 September 1734 is recorded on the parish register of Wertheim. He was confirmed there on 3 November 1747.

Andreas Flegler, a farmer, and his wife Katharina arrived from Lübeck at the port of Oranienbaum on 13 September 1766 aboard a ship under the command of Skipper Johann Grapp.

Andreas Fleger [sic], his wife Catharina, and son Ludw. Fridrich (born en route) are recorded on the list of colonists being transported from St. Petersburg to Saratov in 1767.

They settled in the Volga German colony of Dietel and are recorded there on the 1798 census in Household No. Dt28 [where Katharina Margaretha Petri's age should be 53, not 33 as published by AHSGR in 1999].

The Oranienbaum passenger list records that Andreas Flegler came from the German region of Löwenstein. 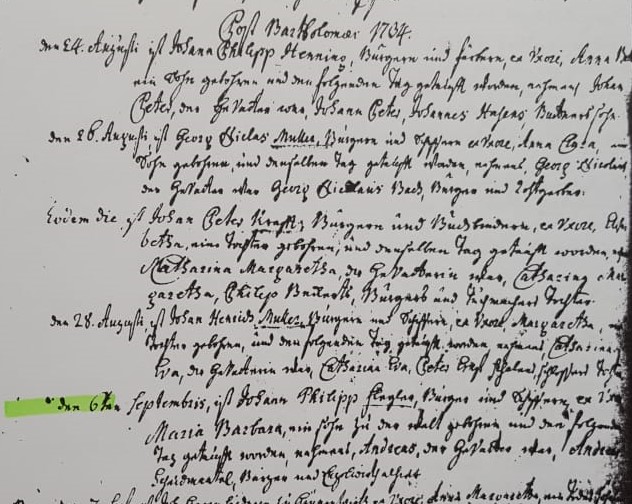 Entry from the parish register of Wertheim recording the birth of Andreas Flegler on 6 September 1734.
Source: Maria Laufer.

Entry from the Oranienbaum passenger list recording Andreas Flegler & his wife Katharina. The entry number is 6899 rather than 5899 as recorded in the translation by Igor Plehve.
Source: Maria Laufler.