Johannes Rommel, his wife Barbara, and son Johannes (age 7) are recorded on the list of colonists being transported from St. Petersburg to Saratov in 1767.

They all settled in the Volga German colony of Hussenbach and are recorded there on the 1798 census in Households No. Hs020, Hs081, and Hs089.

The Oranienbaum passenger list records that Valentin Rommel came from the German region of Fulda.

One of the children recorded on the Oranienbaum passenger list with Valentin Rommel is Johann (age 14). He is actually Johann Adam Zinn, the son of Valentin's wife Kunigunda from her earlier marriage to Johann Heinrich Zinn.

Research reported by Dr. Igor Plehve mistakenly records the children of both Valentin and Johannes as those of Valentin. 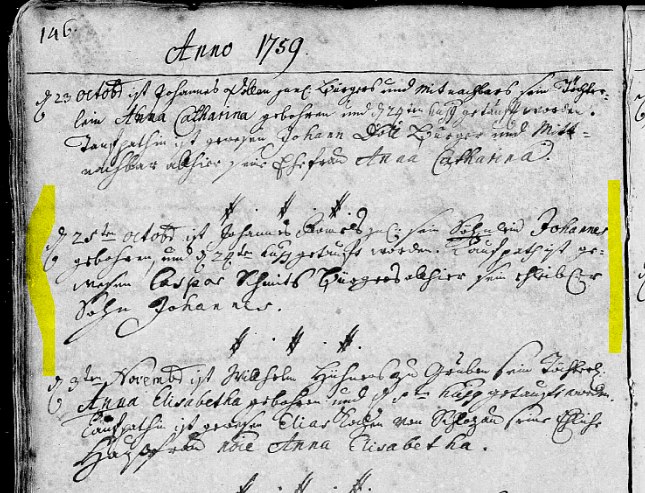 Entry from the Burghaun parish register recording the birth and baptism of Johannes Rommel on 25 October 1759.
Source: Maggie Hein.